Jodi Lynn Copeland, Nothing On but the Radio 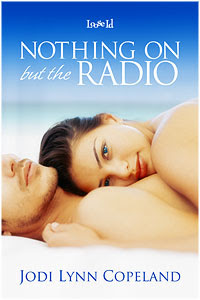 Title: Nothing On but the Radio

To hell with her critics; Taryn James is going to make it in the songwriting industry. If only Brian Macovney weren’t standing in her way. Gorgeous he may be, but he’s also nasty, trampling on her dreams by insulting her lyrics and all because he once failed to deliver in bed.

It’s been five years since Brian had his ego cut down its knees when he failed to perform sexually with Taryn. Now he’s forced to see her again, at the Sugarfoot Island songwriting conference, which he attends as a sponsor and she an aspiring songwriter. From nearly the moment of their reunion, Brian recognizes two truths: Taryn is a highly talented songwriter. And Brian’s eager to regale her with talents of his own...in his bed, on his balcony, bent over the edge of his Jacuzzi tub...

Taryn can’t decipher what’s hotter, her need for revenge, or the feel of sexy-hot Brian in her arms, their body’s joined together and slick with passion. Temptation this good is damned hard to pass up.

Fiery hot passion, and fiery hot attitude- this book is full of wit, drama, and sexy love scenes. The love/hate relationship between Taryn and Brian keep them coming back for more after each frustrating encounter. But sometimes it's just a little too over the top. Taryn wants to make it in the songwriting business, and the conflict comes from a past encounter between Brian and her years back. Sometimes, they both drove me crazy and I wanted to shake them, but overall the story was enjoyable, engaging, and hot. I love books that have themes dealing with aspiring musicians, even songwriters, so this book grabbed my attention just from that aspect alone.