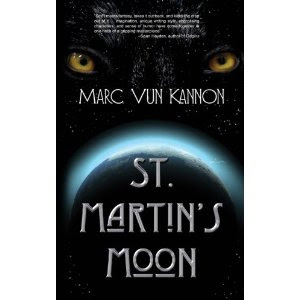 Tagline: The Moon is haunted, but the werewolves don’t know that!

Joseph Marquand didn’t want to go back, he really didn't, but duty called and curiosity beckoned, and besides, it's not like his nights could get any worse. A werewolf attack on the Moon itself was something of a novelty, especially for Earth's greatest werewolf hunter, and if he could lay a few of his own unquiet ghosts to rest at the same time...Well, one ghost. Cynthia's ghost. The reason he'd quit space. The people of Coventry Base definitely didn't want him there. Except for Candace, who was definitely in the minority. They'd found shelter there for a reason, and they were more afraid of the werewolf hunter than they would ever be of a werewolf. Then the nightmares began, and the wolves of Coventry Base found that they were haunted by far more than just their curse. They were being haunted by Marquand's curse as well. The werewolf hunter had become the werewolves' only hope for salvation, but Marquand's only hope for salvation was in one woman with no hope, and another who didn't even know she existed.

St. Martin's Moon by Mark Vun Kannon takes werewolves to the moon. The premise behind this story is that a werewolf should be unable to change on the moon as there is never a full moon in the sky to trigger the metamorphosis. But then, a werewolf killing occurs on the moon and an ex-military werewolf hunting specialist is called in to answer the how, what, when, where and why's of this unusual situation. Major Marquand has skeletons of his own in the closet. He is suffering from a case of PTSD due to the gruesome loss of his partner and lover several years before on the moon. Because of this, he really has no wish to go to the moon again but the case is to intriguing to pass up.

The story takes us through the odd behaviours of the moon colonists, who are definitely hiding something, and Major Marquand's surreal ghostly nightmares. As such, I found the story slightly disjointed. The sections of 'wolfspeak', if that is what they were, never fully explained who was doing the speaking. It seemed to me that it was meant to be wolves speaking mind to mind but the wolf names never coincided with any of the colonists and as such I was unable to relate the conversations to the story. They also were written almost like a chat room, with people leaving the conversation, so maybe it was meant to be a chat room dialogue instead. Aside from that, I found this to be an intriguing story.

The characters were likeable and well defined. The descriptions of the sports that they had invented upon the moon, using both the moons gravity and their extraordinary abilities, to alleviate the boredom of life on the moon were quite amusing. The setting, of a colony on the moon, peopled by werewolves in a self inflicted, secret, leper style colony was a novel take on the old theme of werewolves verses hunters.

On the whole, I applaud this take on the werewolf theme. This is a suitable story for fans of sci-fi and the paranormal alike. None of the scenes were particularly offensive and as such I feel this would also be a suitable read for a teenage reader of the sci-fi paranormal genre. Possibly, this story should even be marketed specifically to that category of reader. I enjoyed this story and it was fairly easy to read and absorb with only the dreamworld and the chat sections requiring some slight re-read. A fun read with a unique perspective Mr. Vun Kannon!
Posted by Siren Book Reviews at 3:18 PM