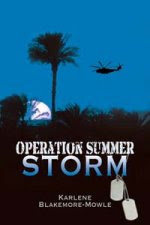 Tate Maddox is a wanted man, accused of a crime he didn’t commit.

Summer Sheldon holds the key to his freedom—for a price.

Her demands are simple--rescue her journalist sister from a rebel hostage camp and she'll hand over the evidence to clear his name. There's just one small catch. He has to take her with him. From the depths of a Cambodian jungle to the tropical paradise of the Philippines, two unlikely allies are forced to learn how to coexist or lose everything each holds dear. Together they must expose a truth that leaves them both vulnerable to the ruthless killer behind Tate’s nightmare.

Murder, blackmail, and injustice brought them together. Will Tate and Summer save Willow and restore Tate’s reputation in time, or will they pay the ultimate price for honor?

Ready for a hot romance filled with plenty of action and suspense? Operation Summer Storm has all that and more. This edge-of-your-seat story will lure the reader away from the world as this book is engaging and memorable.

Summer wants to save her sister, and she finds Tate Maddox to do the job. She's got a bargain for him. Find her sister and rescue her, and in return she will prove his innocence. Seems simple, right?

No, not really. The world they enter is dangerous and unlike anything they've ever known. The two learn to trust and rely on each other to stay ahead of the danger and complete their mission. But the danger they can't seem to fight is their attraction to one another.

Thanks for a lovely review! sorry I only just found it! Merry Christmas!