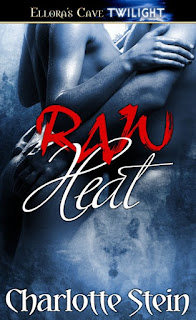 Author:  Charlotte Stein
Rating:  Three And A Half Siren Stones

Serena has spent her entire life in the underground, hiding with the rest of humanity from the werewolf plague above. Then she begins taking care of Connor—a werewolf the humans have captured to experiment on, in the hopes of uncovering a cure—and finds her entire belief system shaken.

Connor isn’t a vicious animal, hell-bent on the destruction of the human race. He’s kind, thoughtful, and above all—absolutely delicious. The feelings he’s starting to inspire are sending Serena out of control…lewd, filthy, glorious feelings, which could cost her job as a nurse. Not to mention her life.

Lust and love between a wolf and a human are strictly forbidden. But for Connor, Serena may be willing to break all the rules…

In many ways Serena is more captive than the werewolves caged inside the facility being abused, beaten, and experimented on.  Never knowing anything beyond the sterile harsh environment of the disintegrating community in which she abides, Serena is conflicted by her attraction to Connor and the disgust and hatred that are common within the small society that she lives among.  Having cared for the massive werewolf for over a year, a forbidden relationship develops between the two and she is forced to face her true desires as well as her biggest fears.

Connor is a werewolf unlike any other that they had experimented on. He endured abuse and never attempted escape.  Although infected by the virus for many years he was able to maintain his handsome human form and the memories from his previous life.  His desire for Serena, however, was as feral as the beast forced out of him during the torturous "medical" experiments conducted on him daily.
Raw Heat is an action packed quickie that will leave the reader wanting more.  This page turner contains as much carnal heat as it does adventure while Serena and Connor find themselves forced to choose between the possibility of death at the hands of humanity or risking death by living life on the run.

Raw Heat earned 3.5 Siren Stones because this story has clean editing throughout, is a quick and easy read and is certainly a book to come back to on a lazy Sunday afternoon.  I did often find myself wanting to know more; more about the virus and the way it has affected mankind, more about Connor's past, more about Serena's past and more about the circumstances surrounding the climax of the book. Raw Heat seemed more like an excerpt than a short standalone but was enjoyable from beginning to end.
Posted by Siren Book Reviews at 7:34 PM