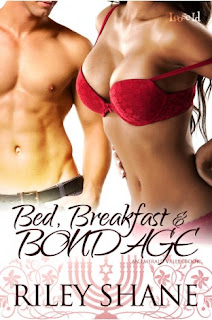 Blurb/Summary:
Most women wouldn't mind waking up to find six feet of perfectly-defined male muscle cooking for them. Then again, Anaya Bancroft isn't most women. She's the innkeeper and co-owner of Emerald Valley Bed & Breakfast and it's only pure desperation -- and a complete lack of ability in the kitchen -- that have her turning to her ex for help with the B&B's biggest event of the year. Devlin Levi may be a famous chef, but he broke Naya's heart once and she's not about to let him do it again. Devlin is welcome in her kitchen, but that's it.

At least, that was the plan.

Devlin has a plan of his own, one that could change everything. He wants Naya to give him eight nights. Eight nights of unbridled passion, eight sexual fantasies explored and fulfilled, eight chances to prove they're made for each other. If, at the end of their time together, Naya still believes they can't make a relationship work, the two of them will part -- for good. It's a bargain Naya can't resist, even though she fears it will end in heartbreak.

Then again, a lot can happen in eight nights…

Eight nights, eight chances.  This was a wonderful, engaging, sweet love story.  Do not be put off by the “Bondage” in the title; while Dev and Naya explore their sexual boundaries, they do it in a loving, non-threatening, sweet way.  I was captured from the beginning, both Devlin and Naya are easy to like and uncomplicated.  Their families are the same.  What appealed immensely to me the more I read was the role their faith (Judaism) played in the story.  This is the first book I’ve read in which the traditions and beliefs of Judaism are easily, seamlessly incorporated into a reasonably erotic romance.

This is a story many readers will relate to; two adults who love each other whose lives have taken different paths yet who always gravitate back to one another.  Do they finally realize what we’ve known all along?  Read this and find out!  Chocolate mousse will never look the same to me.
Posted by Siren Book Reviews at 1:55 PM