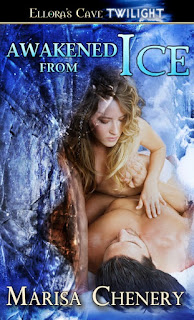 Book one in the Werewolf Sentinels series.

Exploring an ice cave on the Mantanuska Glacier in Alaska, Cassidy finds something out of the ordinary—six men dressed in fur and leather, motionless and seemingly dead. But she soon discovers they’re very much alive when her touch awakens one—and she finds herself pinned beneath his muscular heat in the blink of an eye.

Edensaw and his wolf brothers have slept for ten thousand years. As ice age Tlingit Indian hunters, they were chosen to be a new race of man, the first werewolves. They are the sentinels, created to protect against evil that is to come. But the touch of one woman ignites his mating urge and Edensaw awakens before he’s needed, into a world he no longer knows and a passion he cannot deny.

As the couple moves from lust to love, the dark evil brews, threatening not only to destroy the mating bond, but the sentinels themselves.

I found this story to have an interesting premise for a werewolf series.  The author did a great job of showing the reader how uncomfortable ice age men would be in the twenty first century.  It was refreshing to see our world through the eyes of someone seeing it for the first time.  Marisa Chenery also used a clever explanation to bring the wolf brothers into our time with some current knowledge.

The story had a great pace to it and the characters are interesting.  This is the first story in a series so there was a lot of setting up to do.  Marisa Chenery sets up this new world with good and evil werewolves, pack politics, immortality, and mates yet to be found for the other wolf brothers.

Awakened from Ice is a paranormal romance with splashes of humor that keep the pages turning and the reader engaged.  I look forward to seeing where this series goes from here.
Posted by Siren Book Reviews at 8:51 PM