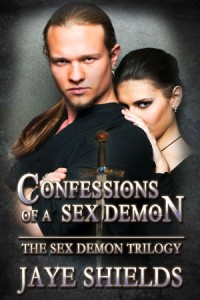 Title:  Confessions of a Sex Demon

Tagline:  Zahra proves that sex demons do it better as she goes from captive to captivator.

Sex Demon Zahra Aniron is a closet romantic. Too bad she spends her time having hot, kinky sex with paying strangers. But she needs the money to pay off her sister's debt to wizard thugs. There could be worse things than getting paid for pleasure, especially since a sex demon needs climax to survive.

As a blacksmith, Lennox Aegros puts his fury to good use pounding steel into swords. When he arrives at a new town, his real cause for being there isn't to sell weaponry, it's for revenge. When he finds the succubus he's been searching for, her beauty means he can mix business with pleasure. But the joke's on Lennox, because as he succeeds in torturing his victim by repeatedly bringing her to the brink of orgasm and then denying her the release that she so desperately needs, he realizes that Zahra's slow demise means the breaking of a heart he didn't think he had.

They say hell hath no fury like a woman scorned.  Lennox proves otherwise.  Hell hath no fury like a lover scorned.  Determined to take his rage out on somebody, the sister of the demon who stole his wife seems to be the perfect target.  Not only is she his only sister, but she's also a succubus, a whore who doesn't deserve even the slightest empathy.  In this story, we really get to see all sides of Lennox.  From the loving and sensual side that book one painted of him to the tormented soul that the infidelity inevitably creates.  Lennox is so much more than the "psychopath" kidnapper of a succubus whore, and watching his walls all come shattering down is an emotional roller coaster.

Zahra is so much more than a succubus, so much more than a whore, so much more than an ordinary woman.  She is the embodiment of strength, courage, and selflessness as she takes on the debts of not only her adopted sister, but unknowingly her brother as well.  As the story progresses, she proves that although she willingly plays and entertains paying partners and gains vitality from each climax they bring, she doesn't do it simply for her own gain.  When Lennox's torture leaves her on the verge of death, the thought of saving her sister is the only thing that drives her to survive.  Her bravery and resolve combined with her wit and sarcasm make her an easy heroine to fall in love with.

Lennox and Zahra's story is the second in the series and does not disappoint.  This book packs even more emotion, heat, and conflict than the first in the series and definitely keeps the reader captivated from beginning to end.  The author once again paints the realm perfectly and enables the reader to become completely engulfed in the world she created.  There were several points in the story that elicited emotional responses as the reader relates to the characters and their struggles.  The editing is clean and the cover art is alluring.  This book deserves a five Siren Stone rating because it works well as a stand-alone but creates a desire within the reader to become even more familiar with the secondary characters.  Well done.

Posted by Siren Book Reviews at 10:27 AM

*gasp* What an incredible review. I came home after a long day of flying and damn it if I don't want to drag you to a bar and celebrate ;) Thanks, hot mama. Glad you enjoyed Confessions of a Sex Demon.