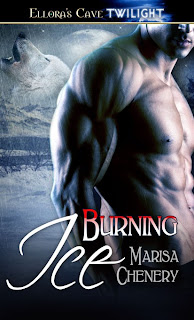 Author:  Marisa Chenery
Rating:  Four And A Half Siren Stones

Riya is a bit of a klutz. And how. Not only does she head-butt the most gorgeous man she’s ever seen, but she also manages to put them both in the path of a charging bear. She’d only thought to spend an enjoyable afternoon fly-fishing for salmon, not doing her best to repel the sexiest man alive. Luckily he’s made of sterner stuff.
Capac is more than thrilled to find his mate, even if she’ll forever keep him on his toes. But with the change in leadership of the dark wolves, Riya will be in greater danger than his wolf brothers’ mates ever were. Capac has no choice but to integrate Riya into his world post-haste, or risk the chance of losing her forever.

Burning Ice is book six in the Werewolf Sentinels series.  The story jumps right into the ‘meeting of the mate’ with no introduction of the characters or set up.  Due to the fast start of the storyline, I felt like I was behind and missing a lot of information.  It felt a little rushed.  Burning Ice is not a standalone story and you will want to read the other books in the series so you know what is going on and what has taken place already.  There are some references to the past throughout the book, but much of the explanations come at the end of the story.

With that being said, I did like the story of Capac and Riya.  Capac wastes no time putting a claim on Riya after a little excitement involving a bear.  He’s thrilled that there is an end in sight to his long dry spell with the meeting of his mate.  Capac is determined to make Riya his and make her happy.

Riya’s klutzy nature lends to quite a few laugh out loud moments.  She’s very entertaining in a train wreck kind of way.  Riya is excited and apprehensive regarding Capac.  She’s excited that such a handsome man is interested in her and apprehensive because she has a history of failing relationships.  Men didn’t find her klutzy nature appealing, but Capac takes everything in stride.

There are plenty of fireworks between Capac and Riya.  Even Riya’s apprehension can’t stop the feelings that she’s having for Capac.  The two set the sheets on fire and we get to see the beginnings of their love for one another.

The evil werewolves persist in this book and take more casualties with them.  While the wolf brothers learn more about their powers and a new character is introduced.  The secondary characters and the evil plot help move the story along but leave the reader with many questions at the end.

If you have followed the Werewolf Sentinels series then you are not going to want to miss this installment.

Posted by Siren Book Reviews at 10:14 AM