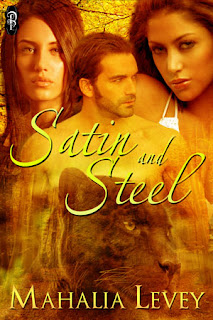 Author:  Mahalia Levey
Rating:  Four And A Half Siren Stones

Amaranta Costa uses her Kanima as an avoidance tactic, until the one person she cherishes most is taken from her. When Gavin Ford enters the fray uninvited, she’s forced to accept the help of his pack to find her mate. Trusting others isn’t her forte. Though her inner jaguar accepts him hands down, the woman in her fights his dominating, take-control nature. Unlike Marisol’s soft personality, Gavin’s wolf challenges her at every turn. She can find no escape. His abrasiveness both sets her on edge and pleases her. She finds being in Marisol’s arms isn’t enough; the all-consuming need to be his burns to her core. There’s no denying the chemical attraction arcing among the three of them. Will she reach out, and accept the love and support waiting for her?.

Amaranta is a jaguar spirit-shifter that is responsible for assassinating serial killers of the human or shifter variety.  Her brothers are jealous of her talent and don’t understand the pressure and stress; her mother is horrid in every way, and her father only supports her if she’s doing what he wants.

Marisol is Amaranta’s safe haven and support system.  Mari is Amara’s lover, mate, and human.  They have been in a relationship for the last three years.  Now the love they share together is being challenged by outside forces.  Being human, Mari is more willing to go with the flow, but Amara is a shifter and likes to have control over her world.  It makes for some interesting dynamics.

Gavin is a wolf shifter and is in love with both Mari and Amara.  He has known that he belongs to Amara and Mari since he first laid eyes on them.  Now all he has to do is convince them.  Therein lays his challenge.

When Mari is taken by a deranged man, Gavin steps in to help and ends up taking control over the situation, as much as Amara will allow.  Amara doesn’t trust Gavin, but Mari hands over her heart without reservation.  Gavin and Amara set off some fireworks while they come to understand one another.

The secondary characters in both Amara’s family and Gavin’s pack helped to support the plot and added some humor.  Gavin’s pack members were interesting and written in a way that the reader wants to know more about their lives.

Ms. Levey takes a unique spin with this shifter story.  The usual standards of species sticking to their own and shunning humans were smashed in Satin and Steel.  There are other stories that have dealt with these issues, but Ms. Levey takes them all on in one story and adds some little surprises for the reader.

The cover art is gorgeous and the story is captivating.  If you like shifter stories then give this one a try.

Posted by Siren Book Reviews at 9:16 AM