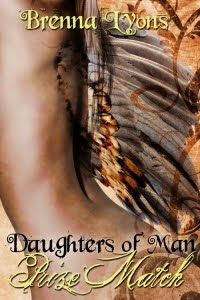 Reviewer: Stacey Krug
Blurb/Summary:
Sabine has come to Sakk, a winged female, a prize match. Her mate will be an older male, a general or master general. She has no choice in that. The only power she has is to refuse an abusive mate.

Sahtahn has no intention of fighting to approach the prize match, but when Sabine is attacked on her way to the riser, he changes his mind. She's not the cold woman he'd believed her. She's a frightened young woman in need of a gentle hand. If she accepts his advances, he will have the greatest prize imaginable.

We enter the story as Sabine is getting ready to embark on Sakk, an alien planet, to be claimed by a mate. We get to experience some of her apprehension and fear.

As more about the culture comes out so does the personalities of both Sabine and Sahtahn. It’s hard not to fall for this couple and hope the best for them. Between Sabine’s loving nature and inexperience and Sahtahn’s kind, caring nature and experience; the two just about light the pages on fire.