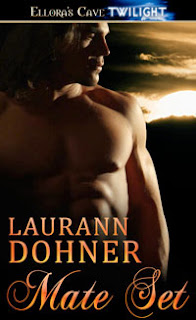 Grady is a half breed whose human mother abandoned him to his werewolf father, so he knows human women just aren’t safe to fall in love with. The wolf within him wants Mika as his mate, but Grady will not give in. Never. Ever. He’s willing to fight his emotions and his beast, no matter how much sexy Mika tempts him.

But neither of them expected her Uncle Omar to assign Grady to protect her from other males—24/7, in her home, sleeping just down the hall. Mika decides to make the best of her vacation and keep the hot wolf in her bed. Grady can’t resist the scorching sex, but he is determined to resist the bond.

Mate Set had me hooked from the first page to the last. Laurann Dohner created wonderful characters that will have you laughing and feeling their emotions. It is very well written.

There are some great plot twists and they will have you reeling from one to the next. Grady and all of his issues about humans will have you on the edge of your seat. As a reader, you’ll experience all of Mika’s feelings. The two of them have such chemistry together that it’s one of those stories you just can’t put down.

Grady’s brothers enter the story later, but I hope that Laurann Dohner has plans for them in the future. This is one werewolf pact to tune back into later.

I really enjoyed the story and would recommend it to werewolf or paranormal romance fans. I look forward to other creations by Laurann Dohner.