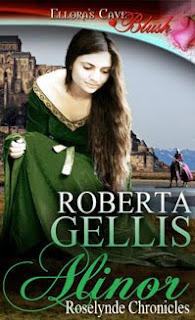 Now alone, despite her exquisite beauty, Lady Alinor is physically and emotionally deprived of love—until her amorous desires are stirred by the dark, sensuous Lord Ian de Vipont. Trapped in a maze of treacherous power plays and volatile liaisons, she is irresistibly swept into an intoxicating passion for a man whose forbidden love promises only pain and peril. A strong-willed woman desperate in her quest for love,Alinor will not heed even the most torturous obstacles in her path.

From the brutal battlegrounds of France to the rich pageantry of English courts, Alinor’s turbulent adventures and romantic passions weave a breathtaking tale of danger and desire.

Alinor by Roberta Gellis is a unique view of the courts and life in England during the rule of the infamous King John, Lackland. While this book is promoted as a passionate romance, I believe it should be seen more as an historical novel with some romance woven into it. This in no way detracts from the tale of the Lady Alinor and Sir Ian. However, Alinor is more the story of the English courts and politics during the rule of King John, Lackland.

In Roberta Gellis’ novel, the premise is taken that King John was actually a very astute and intelligent ruler. In the many versions of Robin Hood, Prince John is often seen as a usurper who only wants tax monies. Here, in Alinor, he is portrayed as a king who was left a bankrupt kingdom and while still rather lecherous, was certainly not the worst that England had to offer at the time.

The romantic scenes between Alinor and Ian are few and far between. What fills the pages of Alinor is the pageantry, deceitfulness and corruption of the English courts during the rules of Kings Richard and John. This is a story of knights, bandits in the woods and licentious court followers. Roberta Gellis has created a love story of the ilk of Robin Hood, set just a few years later, under the rule of the loathsome King John. Read Alinor if you are looking for a story along the lines of the Sherwood Forest tales and you will be pleased.