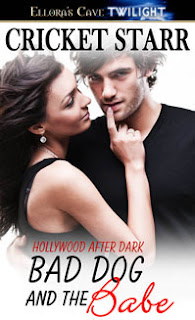 Title: Bad Dog and the Babe

A Hollywood After Dark book.

Al isn’t happy when a beautiful, upper-class werewolf female in heat struts into his bar looking for her underage sister. Barbara is trouble, proving it when a riot breaks out over the right to mate her, although he can’t complain when he ends up taking her to bed instead.

Barbara needs Al to keep her heat under control while she searches for her sister but there can’t be anything permanent between them. She might be attracted to Al’s “Bad Dog” persona but she knows he isn’t the right wolf for her. Too bad he’s so good at scratching that pesky itch she has at the moment—although she really wishes he’d stop calling her Babe.

Lots of werewolf sex and encounters with vampires, spellcasters and other parafolk lie in their future—just another busy weekend in Hollywood After Dark.

Bad Dog and the Babe was a great story to enjoy. Barbara really had her work cut out for her being in heat and wanting such a fine specimen of a man but denying not only herself but him as well for a long term relationship.

Add in a kidnapped sister and societal beliefs and you get one big cluster fuck. I felt for Al and hoped he’d keep trying or form a protective shield around his heart to lessen unintentional hurtful blows that kept spewing from his mate’s mouth. What’s more is that it was apparent she was clueless to the effect of her words and the impact they made.

Al was a delightful hero, even with the woman he came to love, her learned behaviour stemming from her rigid upbringing, he stayed true to the cause and not only kept her safe but had her back as well, showing the stuffed shirts she was more than just a woman, and more than just a shifter. Their passion melted the pages and the relationship that grew garnered my respect even more. I loved Al’s mother and her no nonsense mindset. Her brutal honesty I believe is what set the wheels turning in Barbara’s head.

As the plot thickened it gave good credence that what’s on the outside isn’t what matters and regardless of social standing—status, doesn’t make the man.

This is a book I’d love to pick up again and read.