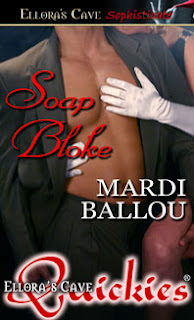 Hit TV show lovers Gwen and Dirk are a real-life couple. After a production shake-up, a hot young starlet is hired to replace Gwen onscreen. Threatened much? Gwen is terrified that Dirk, who’s ten years younger, will leave her in real life too—but she won’t give up without a fight.

Dirk adores Gwen, but her paranoia is killing him…killing them. He’s at the end of his rope when he finds one more piece of rope—in the front seat of his car. Hmm…the possibilities.

Soap Bloke was a great read. I’m not into much daytime television but after reading this delightful story, maybe I should turn on the tube and see what I’m missing. I found Dirk and Gwen an adorable couple.

Gwen’s insecurities stemming no doubt from the lime lights younger is better mindset, and her man’s previous relationships. What I saw was that Dirk really loved Gwen in a way that had nothing to do with age but everything to do with all woman. They had an unrivalled chemistry that blazed white hot. I felt if she kept up, she’d lose out on a good thing, love.

Dirk really showed me how compassionate he was when dealing with his woman and his job. The fact that he had enough control to separate business from pleasure on set showcased how well he could rein in emotions and remain logical at the same time. I was saddened when their profession and their personal life came to a cross roads. I only hoped he’d be able to find a different approach to showing Gwen he was hers for keeps, and hoped that Gwen would trust in him.

Posted by Siren Book Reviews at 7:40 AM