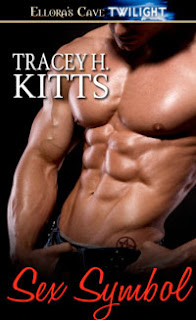 Lucy Harper always thought of herself as an ordinary woman, but she suddenly finds herself in extraordinary circumstances. Her sleepy hometown of Peace, Mississippi, turns out to be far from peaceful, what with shapeshifters, vampires and other departures from the “good ol’ Southern boy” stereotype cropping up. Her best friends are all hiding devastating secrets. Her ex-boyfriend is suddenly interested in making up. Her sexy new boyfriend is not only the hottest guy she’s ever met, he’s got some pretty big secrets himself, including what he really is and what he does—besides providing the best sex she’s ever had, that is.

And her new tattoo might be more than a picture of her favorite flower—according to the local werewolf pack, it’s a “sex symbol”. There may be a fight to the death over who gets to claim her as mate.

Lucy Harper had me tickled from the beginning. I loved how she fit in wherever she was and her respect of everyone’s privacy. I’ve rarely seen heroines who didn’t ask a million questions or who were satisfied with only knowing what people allowed them to see, so in this Lucy is a breath of fresh air in a smog filled world. As the story evolved I witnessed growth as she interacted with the two heroes in the story. While I feel that her time spent deliciously with her best friend, and then further on with her man helped her fit in where she needed to be more.

It was hard watching her struggle with letting go from her past relationship to embracing the future, something which is hard for anyone to do.

I won’t touch much on Oz and the sexy neighbour. The two males gave me much delight. No spoilers from me. Add in her best friend Justina and Chase and you have a great rapport of sorts. I thoroughly enjoyed this book and its ending, it’s definitely a must have.

If there’s one thing I could touch on it’d be having the heroine addressed by her first name in the beginning of the story by one of the other characters or even in self -reflection. I find in first person it’s hard to relate to, no matter how fantastic the story is. All in all though, this is one of my favourite first person stories I’ve ever read.