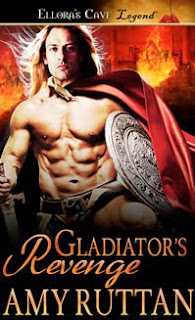 Taranis had one thing on his mind since the Romans enslaved him. Revenge. Until he laid eyes on the innocent beauty of Lavina, a daughter of his enemy. It was then that he knew how to wreak revenge against those who’d wronged him—by taking one of Rome’s daughters, over and over again.

Lavina is humiliated by the decadence, greed and violence of Rome. When she meets the gaze of the condemned gladiator across the Circus Maximus, he stirs a deep yearning in her heart, but it is not meant to be. She is destined to marry a man who’s soul is as black as night.

On a whim, Emperor Nero grants Taranis freedom with his choice of a wife. Taranis chooses Lavina, much to the horror of her parents. Only Lavina is not disgusted by this prospect and revels in Taranis’ touch. He finds himself caring for and falling in love with the little Roman.

Yet, a shadow falls on their happiness and soon Lavina will have to choose between her home and her heart.

Gladiator’s Revenge by Amy Rutton took me back to the time of the Roman Empire. Slovenly rich, the men decided the fates of any man under them from house staff, to slaves. Freedom didn’t mean forever free and could be snatched away on a cruel whim.

When Taranis chose Lavina I wondered how they’d manage to survive, especially with the odds stacked unfavourably with them. He was so filled with anger and the need to avenge that I thought he’d miss out on the opportunity to find love. Somewhere in the midst of making love to his wife and finding good, his haze of revenge clouding his being dissolved and they had a chance to find their happy ending.

I enjoyed this read and look forward to other works by Amy Rutton.

I'm glad you enjoyed it. Thanks for the great review.