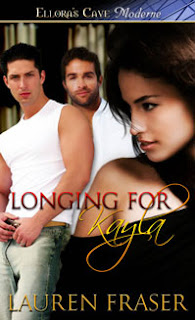 After dumping her boyfriend during her birthday ski weekend, Kayla runs to the two men she can count on, her best friends, Jesse and Chris. Reckless and hurt, she throws caution to the wind and confesses her deepest fantasy—to be with two men at once.

Jesse and Chris have shared women before, but Kayla is not like other women. She knows them better than they know themselves. But what she doesn’t know is that Jesse has a forbidden fantasy of his own. When she discovers it, she encourages Jesse to go after what he wants with Chris in the bedroom, opening a whole new world to the three of them.

In love with Kayla for as long as he can remember, Chris is excited to finally have her, but he never expected to desire both of his friends. He’s straight. How the hell can he want Jesse as well? With everything changing, can these friends move beyond what they’ve known and find a way to build on the newfound love between them?

Kayla's birthday weekend isn't going as well as she'd hoped. She dumps her jerk of a boyfriend, and turns to the two people she cares for the most; her two best friends, Jessie and Chris. That weekend changes things for the trio, as Kayla tells them the reason she broke up with her ex, and then she reveals to them her fantasy, to be with both of them.

I've had the pleasure of reading a few of Lauren's works, and haven't been disappointed. Longing For Kayla is a hot, quick read, but be aware, it will take your breath away and have you begging for more!