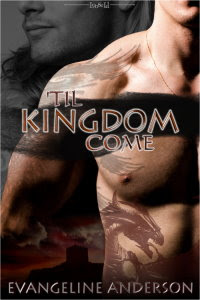 In a time of mystery and magic, one man is seeking to find his destiny. Prince Thrain Blackwater is on a deadly mission to capture the one who can help him get his revenge and make him whole. But in order to do so, he must perform an act of brutality that will alienate the man he hopes to claim as his own.

Prince Elias Trueheart is a Null—a noble of the royal Trueheart line who has no magic of his own. Resigned to a life of obscurity, his entire world is turned upside down the night Thrain comes for him. After the Blackwater prince claims him in a way Elias feels he can never forgive, he kidnaps him as well and drags him back to the snake pit he calls home—Castle Black.

Thrain is certain Elias will hate him forever—and he doesn’t blame the other man a bit. Still, he hungers for Elias’s love and will do anything to earn it, even if it means facing down his brutal older brother who wants Elias for himself. But will Elias ever return his feelings or is he incapable of forgiving Thrain’s crime? He will have to make up his mind very soon for beneath the dark and dangerous Castle Black lies a secret that will unlock Elias’s magic and a deadly riddle that will put both his life and Thrain’s in peril.

From the very beginning, Thrain stole my heart. To be a part of a family so vile that it didn’t rub off on him endeared me to him. When he was forced to do something he swore never to do I felt for him, he as well was victimized by the occurrence as the victim. His protective ways made my heart swell.

I fell for Elias almost at the same time. He went from being a shy young male to a man who refused to be kept by ill means. The magic in the story was woven intricately with purpose that wasn’t clear until I’d finally made the last few pages.

I got a chance to slow down and take my time reading this read. It’s not a fast paced one, if you read it fast I assure you that you’ll miss out on something important.