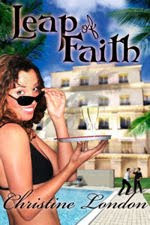 Author: Christine London
Rating: Three And A Half Siren Stones

Film student Faith Holmes is on an Italian holiday bought and paid for -- a familial inducement to finding an Italian husband. She wants none of it. Boredom and curiosity make for a volatile mix and Faith is lured into the heart of the island of Forio's exclusive international film festival not as guest, but crasher.

Hollywood's premiere publicist Hunter Jameson has more than enough on his plate when his client, English film sensation Alex Winslow decides he's departing from the straight and narrow. One American party crasher should be the least of his worries. He has no idea that Alex’s growing feelings for Faith rival his own. The only thing for certain is his life will never be the same.

The setting initially drew me to this book; I adore Italy. Not an original passion I grant, but a very sincere and heartfelt one. The descriptions of the setting were very good, but I do feel a little more research should have been put into the language aspect; there were some glaringly obvious mistakes that spoilt the overall presentation for me.

The evolution of the interaction between the characters was good, as was the majority of the plot. However, I did feel some points were laboured, resulting in parts of 'the message' being hammered home a little too heavily at times.

The emotional aspects of the story were told from the individual characters perspective, and this gave a better indication of the emotional depth of each.

I would have liked to see some of the background story, especially Faith’s history, developed a little more though. On the whole, this was an enjoyable read.