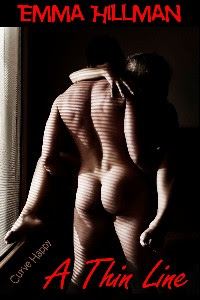 Author: Emma Hillman
Rating: Three And A Half Siren Stones

Kate finds herself locked up in her apartment building’s laundry room. It’s the middle of the night and there’s aman with her. Which would be the great start of a horror movie, except this is real and thankfully the man isn’t that bad. Actually, he’s quite nice. Oh, and hot. He’s a neighbor she’s seen a few times, the playboy with the golden looks. And as they find themselves sitting increasingly closer in an effort not to freeze to death, hands bump into parts of her body that haven’t been touched in years.

It could have stopped at that: one night of pleasure, albeit in a weird location. Except it doesn’t. Even though she knows Jace has another girlfriend, she still opens her door to him every night. He is addictive. And sometimes, he’s even nice. But what happens when the drama finally takes its toll and she bars her door to him?

A Thin Line was a roller coaster of a read. Kate had some decisions to make about her relationship with Jace. I really felt for her and the way he was treating her and hoped either he’d shape up or ship out. When she stood her ground I was proud of her

Jace had some serious issues to overcome and decisions to make. I wasn’t fond of him in the beginning or middle, but when the light bulb dinged and he found the little things in life mattered more than his current situation, I couldn’t have been more pleased.

The passion between the two rocked but I wanted more, I wanted to see an emotional connection of a relationship that had a solid foundation. I was pleased with the end result.