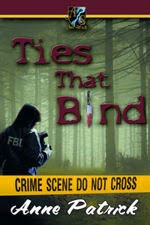 FBI profiler, Jo McDaniels has an unusual gift. As with most
profilers, they are able to take the evidence, background of the victims
and crime scene photos and reenact in their minds what took place between
the killer and the victim. But what if there are no crime scenes and the
victims have been decapitated in order to hide their identity? This is
where Jo's unusual gift comes into play. Unlike most profilers in her
field, she is able to go a step further. Using her psychic ability she is
able to sense exactly what victims felt prior to their death. Her ability
allows her to get to know the victims better than anyone else. She not
only feels their emotions; she feels their pain.

Sheriff Austin Garrett doesn't quite know what to think of the sassy and
beautiful profiler that is able to tell him more about the victim after a
few minutes with her than the coroner knows. But he's willing to try
anything to catch the serial killer plaguing his community. In all his
years in law enforcement, nothing has prepared him for the monster he is
up against now. A killer so cruel and calculating that it leaves him no
choice but to turn to Jo and her unique gift.

Jo knows the risk she's taking by using her psychic abilities. The last
time she relied on it, it almost cost her career as well as her sanity. As
the case progresses and the body count rises they soon realize that Jo's
sanity isn't all that is at risk. She has become the killer's ultimate
kill.

Ties that Bind by Anne Patrick is a forensic mystery. A serial killer is on the loose, and psychological profiler is brought in to aid the local small town sheriff. The profiler happens to be a long-lost town local that is on the outs with her family. She also has some psychic abilities which she utilizes in the completion of her cases.

As a forensic mystery, for me, this one was not hard to solve. I had it solved correctly the moment the character was introduced and described. I did have to wait until nearly the end to be sure, but I was correct. There were not a lot of possibilities to confuse the reader.

The book itself read well and well edited. The story flowed nicely, and the two main characters also were nicely filled out. Even the cover looked good on this book.

However, the story contained an on-going under theme pro-Christian in origin to the telling of the tale. At first this was not detrimental to the story, but as the reader nears it’s end, it increases in frequency. Ties That Bind is an eminently readable short crime mystery.