Karen Dales, Book One of the Chosen, Includes Changeling: Prelude to the Chosen 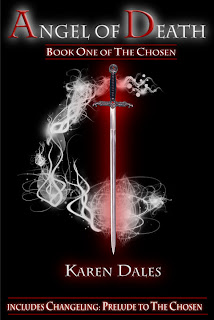 Title: Angel of Death; Book One of the Chosen, Includes Changeling: Prelude to the Chosen

When Father Paul Notus is captured and threatened with a gruesome death by the Mistress of London and her vampires, the Angel is forced into a dark world of murder and deception to discover who is killing the Vampires of Britain.

Forced into a partnership with the Noble Fernando de Sagres, a vampire of sadistic tastes, and joined by the beautiful and mortal Jeanie Stuart, the Angel seeks out who is behind these killings.

Plagued by demons from his past and his increasing affections for Jeanie, the Angel walks a fine line between his heart and his fears. He discovers the culprits but at a high cost – the irrevocable discovery of what he truly is and the Destruction of one he loves.

Karen Dales is the Author of The Chosen Chronicles. Writing fiction from an early age she went on to complete York University’s creative writing program. She has been published in numerous periodicals and has been interviewed by The Toronto Star and The National Post. Karen is married, has one son, and two cats. She lives in Toronto, Ontario, Canada. Currently she is at work writing the next novel in the series, Shadow of Death: Book Two of the Chosen.

Angel of Death: Book One of the Chosen by Karen Dales was by far one of the best stories by a new and upcoming writer that I have read. I cannot wait for the sequel, and wish that I were able to continue the series right now.

The Angel’s story will bring you to tears. Unlike other currently popular angsty vampires, Gwyn’s turmoil and pain has nothing to do with the morality of dining upon humans, a re-occurring theme which is becoming over-used.

Like a breath of fresh air, Gwyn’s problems arise from the fact that he is a nearly seven foot tall albino, born into a medieval world completely unequipped to deal with such an individual. He also is not exactly a vampire, and may not have been entirely human before his conversion.

The chosen fear that he is tainted, and believe he should be destroyed, like an animal. The Angel, is not even allowed love over the millennia that he is forced to endure.

While there is humour in The Angel of Death, this is a story of humanity’s failings. The one person that constantly shows true humanity in the face of 1000 years of abuse, is the one individual that may not in fact have ever been fully human.

This tale was wonderfully written. Every character has a complete and utterly unique personality. Various readers will be able to relate to someone within this story. While there were a couple of small editing errors, nothing could possibly take away from this story.

The Angel of Death will make you smile, and it will cause your heart to break. Very few stories are the equal to this tale. When you read this story, have a box of tissues handy. Ms. Dales I am trying to await the next instalment patiently, and it is not working out so well.

I absolutely devoured these stories. Karen has got a way of getting her reader so emotionally invested in the characters that it is impossible to put the book down. I am very anxiously awaiting the next installment in this story!