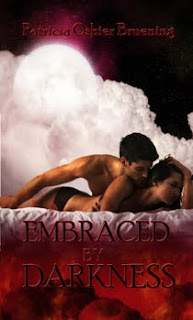 Embraced by Darkness by Patricia Oshier Bruening is an engaging story. As the four main characters meet each other, throughout the storyline three of them discover that while they seem to know each other, they all suffer from complete memory loss.

It seems to have occurred ten-years before for each of them and all had been told a different “accident” story, to explain their memory loss. The fourth main player is a young girl who was born to a recently murdered young woman, also ten years ago. The woman had kept a journal, and may hold clues to these mysteries.

Personally, I would have billed this as a Science Fiction/Romance with a sub genre of mystery, but paranormal works well too. The story’s characters were well developed and likable. Each character has a different and unique personality that was well developed.

The romantic scenes between Ben and Naomi are definitely hot. Ms. Bruening manages the idea of two psychics feeding one another’s desires quite well. I enjoyed the mystery of who-done-it, and what would happen next immensely.

In a couple of places, I found the dialog to be slightly confusing. Also, while the book cover is lovely, it doesn’t have too much to do with the storyline. The image that was repeated over and over as the group fought to recall their past, was that of a flaming institution with fleeing patients. Having a navy officer and a beautiful woman in front of a huge fire might have been more fitting.

This romance story is not just fluff. It contains an enjoyable mystery that becomes harder to put down, the deeper into it you get. I would suggest this for anyone interested in Science Fiction/romance or mystery/romance stories.

I found Embraced by Darkness to be quite a captivating story.