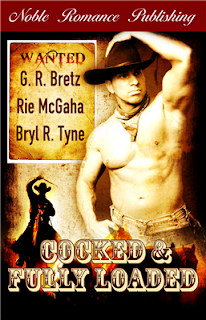 Meet Blue—an ex-Confederate cavalry officer living off his wits and his guns in Reconstruction era Texas—and Sally—a young woman stuck in a loveless marriage to a man who only married her for her family name. When Sally's stage is attacked by robbers, Blue comes to her rescue. Together, they make their way across the Lone Star state. But when they reach a crossroads, the direction they choose will change the course of their lives forever.

Colt has a bullet in his thigh and his face on a wanted poster, but when he rode into the mountains to lay low for a while, he never expected to see a lone woman swimming naked in the river. Hidden in the tree line, he watches her and as desire grows, he takes matters into his own hands, but even that doesn't assuage his need to touch her.

Cynthia hasn't seen her husband in several months since he left her alone to go into town for supplies, but the man she wakes up to find lying on top of her with his hand over her mouth isn't the man she married. He demands she feed him and suggests if she doesn't, he won't have a problem taking what he really wants whether she consents or not.

As Colt watches her make biscuits and gravy, he finds he isn't just enticed by her body, something about her appeals to him on a deeper level and as the two come to know one another, it's apparent the attraction isn't one-sided.

After ten days in the saddle, Chuck just wants a hot meal and hotter bath water. He knows exactly where to find both too -- at home, with his lover, Mitch. But what Chuck finds instead is that Mitch has taken in Carmen, one of the town whores . . . and not only is she sharing Mitch's bed, she's using Chuck's tub. The situation irks Chuck to no end, but not as badly as the images of those wet and soapy feminine thighs that are stuck in his craw and driving him crazy. What the hell is going on? As far as Chuck's concerned, somebody had better start talking and talking soon!

This anthology starts with a bang that continues clear to the final page. The stories serve to remind us just why they called it the “wild” west.

Each piece did a great job of establishing both the time period, and the setting of each story, entertaining the reader, and placing them into a world of complete sexual enticement. Each story played well upon the others, proceeding to make the entire anthology into a complete work of pure enjoyment that keeps you entangled until the very end.

There were a few areas within some stories, which the characters acted in a manner that was completely uncharacteristic to events befalling them. It is for this reason I felt a few of the characters lost some believability.

Overall, I recommend this book to all that enjoy their westerns wild and wicked. It truly lives up to its name.

Posted by Kayden McLeod at 7:34 AM

Thanks for the review. This was my first anthology and I truly enjoyed writing it with GR Bretz and Bryl Tyne, who are not just great authors, but great friends.

Thank you for the review. Much appreciated :)