Louise Crawford, What Lies Beneath 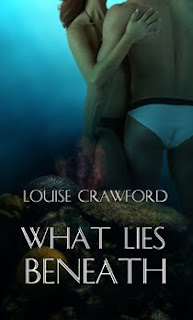 Title: What Lies Beneath

Robert Damien has never seen a mermaid and when he does she's a red-haired siren wearing a face mask. Is he hallucinating? You bet!

Suffering from nitrogen narcosis, he's losing consciousness when the ‘mermaid’ appears and pulls him to the safety of Goliath, an underwater habitat which Rob financed for Global Institute of Oceanography so that he could secretly dive for treasure from the Santa Marta, a Spanish ship which reportedly sank off the coast of Catalina Island.

Like the proverbial mermaid, his saviour disappears back into the sea.

When a red-haired vixen appears at the Millionaires' Costume Ball, Rob discovers she's the mermaid.

Gelsey Roarke can hardly believe the scuba diver she saved is the infamous Robert Damien, a millionaire who has a reputation as a love 'em then leave 'em ladies' man. Gelsey figures out he's the treasure-seeking playboy who practically stole her half-sister's company, then dumped her. So Gelsey decides to play along with Rob's seduction, to enjoy him, then recover the precious Spanish gold for herself and teach him the lesson of a lifetime. But it’s a lesson that two can play

What Lies Beneath by Louise Crawford is a fun-filled romance novel. It is a little bit adventure with some intrigue and fairy tale type romance dashed on top. The story was well written, the editing flowed nicely from beginning to conclusion.

As the story progresses, you learn what drives the characters has previously influenced their personalities. All is not as it previously appeared once the villains come clean.

This was a story that you won’t wish to put down. The characters will make you smile and possibly cry as you proceed with them on their journey from pride, to understanding and finally to love. What Lies Beneath is exciting mixture of romance and adventure that is sure to please. This story is well worth the read.

Posted by Kayden McLeod at 7:39 AM