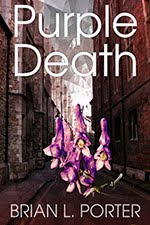 Tranquil suburban Richmond-on-Thames, home to such landmarks as Hampton Court Palace and Kew Gardens, becomes the setting for a series of shocking and particularly gruesome murders that lead Detective Inspector Sean Connor and his team into a labyrinthine investigation in which all roads lead towards a thirty-year-old unsolved murder. The victims, all apparently unconnected to each other, are being dispatched by the use of a singularly unique poison, previously more closely associated with the notorious medieval Borgia family. As the murders begin to multiply at an alarming rate, Connor finds clues hard to come by, and every lead takes him down yet another blind alley. The killer seems to be one step ahead of the police at every turn. Together, he and his assistant, Sergeant Lucy Clay, must piece together the shreds of evidence that will lead them to the mysterious Chocolate Woman and in turn to the brain behind the horrific murders that soon come to be known as "The Purple Death." Purple Death is soon to appear as a motion picture produced by Thunderball Films LLC of Los Angeles.

Set in England, Purple Death is a mystery thriller that keeps the reader guessing until the very end.
A serial killer is loose in the streets of England, or are there two, or maybe even three? Could he be male? Female? Maybe Both? Is there a puppet master controlling everything?
The plot continuously twists and turns, and each time that it seems as though you may be close to a conclusion as to the killer’s identity, the new suspect is added to the murdered list. The only certainty is that the deaths are from a poison that kills in a gruesomely horrific manner. Could this be a vendetta-spree for a thirty year unsolved homicide?

This is a fast paced thriller that travels all over England in search of clues. The story was engaging, and the characters believable. The only question I had throughout was the lack of mention of forensic camera surveillance evidence. Aside from that, the evidence was well done. This book constantly keeps the reader guessing and for this reason stands out among the many mystery stories. Brian L. Porter’s Purple Death was a wonderful read.

Posted by Kayden McLeod at 8:17 AM