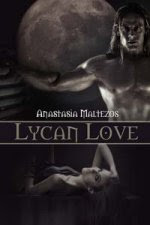 Jennifer Hart’s passionate one-night stand with the sexy and irresistible Lucas Wilde goes from wild heat to burning shame when he tells her to put on her clothes and leave. A week later, she’s back at his nightclub, Full Moon, and she can’t deny the powerful attraction ready to ignite, but this time Jen isn’t so willing to succumb.

When Lucas Wilde set eyes on Jennifer Hart, the spark between them was instant and he brought her home for an incredible night of passion. But he was shocked to learn the Lycan legend was true. A werewolf spontaneously transforms into his Lycan form once he makes love to his soul mate. But that’s not the only problem. Before the next full moon, Lucas has to explain to Jennifer that she’s now a werewolf, and that she belongs to him.

Lycan Love by Anastasia Maltezos was a great quick paced read. I fully enjoyed diving into Jennifer and Luca’s story. The beginning held me captive when the two first met and exploded into white hot passion. I felt for Luca’s situation, that he knew she was for him but hoped he hadn’t passed on his print to her. I could feel the agony of his wait for the moon.

Jennifer tickled me because she wasn’t afraid of what she wanted and she wanted Lucas, but after he left she didn’t back down and call him, she waited. I was half worried when they met again she’d shun him, thankfully lust overwhelms the mind and they found each other again.

What worried me most was the no choice in the matter situation. I hoped when she found out he’d changed her that she wouldn’t be vengeful or angry for too long. I hoped that their passion and chemistry would explode leaving them no option but to go the relationship route and get to know one another regardless of which species they were.