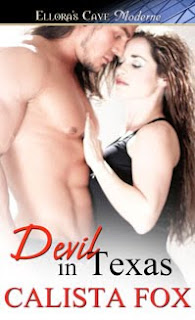 Jack doesn’t date Wilder women and he certainly doesn’t need another complication in his life. He’s running for City Council and trying to keep the morality crusaders in town from shutting down the last-standing public watering hole in Wilder. But when the sexy New Yorker sways her shapely hips through his door, Jack’s convictions instantly go up in flames, along with his body. Jack antes up and goes after everything he wants, including Liza. But is he the only one playing for keeps?

Devil in Texas by Calista Fox was a great way to relax and read. Liza is my type of girl, she thinks of others more than herself and isn’t afraid to rock the boat. I think it was fate that brought her to Wilder and into Jack’s life. If anyone needed a new way of thinking, or the answer to issues in his town, it was Jack. Stuck with an overzealous religious few, his town is dying quickly.

I loved the byplay with Liza and the townie’s and how she spoke her mind and thought outside of the box to give the people of Wilder back their lives. The passion she felt for Jack scared her, more than she probably wanted to admit but when faced with the option of staying or leaving, she chose the right one! This one is a top read of mine, a nice story to make me laugh, and sexy enough to make me drool.