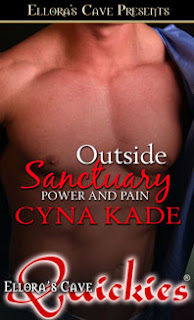 Book 2 in the Power and Pain series

Stephen just needs a little time to himself. He’s tired of sharing every emotion with everyone in Sanctuary. He longs for privacy so he leaves the clan enclave. When Stephen is attracted to a human woman who likes rough sex, he decides to ignore all the rules he’s been taught.

Darla stands tied to a tree at an isolated campsite. She’s always longed to explore her dark side with a strong, dominant man. Stephen is sexy as hell, but he’s hard and controlling. She’s starting to question her decision to meet him in this isolated spot. He might be more than she can handle.

Darla’s tired of safe and gentle sex. She’s looking for someone that can take control and give it to her rough. Stephen’s so excited that he’s found a human that shares his desires for rough sex. In fact, he’s so excited he continually ignores all his clan rules.

Cyna Kade did a nice job with this short story about a clan member’s exploration beyond Sanctuary.
Posted by Siren Book Reviews at 11:05 AM