Beverly Breton, Under A Halloween Moon 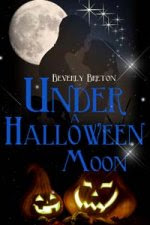 Title: Under A Halloween Moon

Single mother Annika lives a safe existence centered around her five-year-old daughter, a little imp who is growing up faster than Annika wants to admit.

Cameron is a widower working constant overtime to cover for a partner on leave, which leaves no time for his five-year-old daughter, let alone a social life.

But then Cameron has no interest in the women focused on his long eyelashes, the fit of his jeans, and the size of his paycheck, and Annika has steered clear of the turmoil of relationships ever since her divorce. Are the two destined to remain single?

Until the Halloween moon when Cameron crosses paths with the bewitching single mother of his daughter’s best friend, and aweekend of mischief, masquerade and magic convinces Annika to take a chance on love.

Under A Halloween Moon is a wonderful and sweet story. It’s a story about taking chances and braving the unknown when it comes to love and life.

This story takes place over a couple days in which they first meet and interact because of their daughters. We don’t learn much about their background stories because the focus is on the present and what the future might bring.

I found myself smiling and laughing at the little girls’ antics. Beverly Breton did a nice job of writing a light-hearted story that leaves the reader with hope and a smile.

Posted by Siren Book Reviews at 11:00 AM