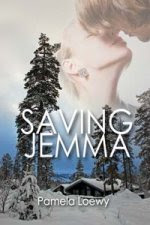 Fleeing New York City after a divorce and the trauma of witnessing a fatal robbery, New Englander Jemma Abbott finds herself stranded in a North Dakota snowstorm with an enigmatic stranger. Lawman Wyatt Kelly doesn't believe Jemma's claim that she's in North Dakota to visit an old friend and her fiancé, who just happens to be Wyatt's cousin. Too much about her story doesn't make sense. Despite Wyatt's suspicions and Jemma's reluctance to get romantically involved again, the two are drawn together by an almost irresistible attraction.

Their encounter is cut short when Wyatt's cousin is severely injured in a hit-and-run. When Wyatt realizes the hit-and-run was no accident, but rather the result of a murderous conspiracy that has Jemma in its crosshairs, he rushes to Boston to protect her and bring the perpetrators to justice. But neither friends nor foes are precisely what they seem...

Saving Jemma by Pamela Loewy snagged me from the get-go. The beginning exploded with fast paced action and kept me suspecting what would occur next. I felt for Jemma when she traveled so far and ended up in a less-than-desirous situation. Wyatt really scared me in his intro. I wasn’t sure what type of character he was.

Twists from there kept me on edge. I noticed the spark of attraction between Wyatt and Jemma and remained hopeful they’d combust. Their attraction didn’t deter from their surroundings or those responsible for multiple felony acts. I hoped they’d catch the villain and cohorts red handed. Wyatt was the perfect protector with his vast experience. I found his wary heart endearing and loved the byplay between him and Jemma. This book would be one I’d read again.

Posted by Siren Book Reviews at 9:16 AM