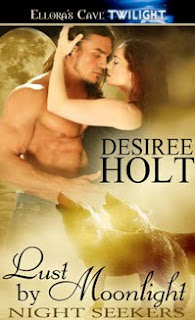 Book 2 in the Night Seekers series.

Chloe Hanson is searching for a friend she’s convinced is a victim of the devil beast. When she meets Mark, she feels a primal tug that tells her they are meant to be together. As they join forces in the hunt, they soon learn that sex between them feeds a need, rather than slaking it. The multiple orgasms barely satisfy their lust for each other, and as they draw closer to their prey, their fiercest coupling is yet to come.

Desiree Holt uses every sense to describe the emotions and feelings of the characters, therefore the reader feels like they are right in the middle of the scene. Add in some breathtaking love scenes, suspense, and mystery and that sums up Lust By Moonlight. It is the second book in a series, and I will definitely be looking for the first. Reading Mark and Chloe's story engaged me from the start. The sexual tension between the two is hotter than the desert in summertime.

If you like shape-shifter wolf books, then check out Lust By Moonlight, a great read!

Posted by Siren Book Reviews at 9:11 AM