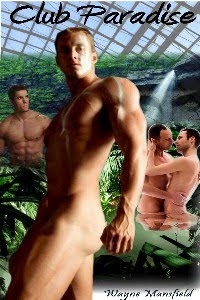 Nicholas Webster is a young, handsome and very successful lawyer. He has an extremely comfortable life and can afford anything his heart desires. However, there is something missing. Excitement? Danger? Pleasure? Therefore it is fortuitous that he meets Edmund Phillips, a very successful older man, who takes a shine to Nicholas. When Edmund invites Nicholas to a secret and very private “Gentleman’s Club” Nicholas doesn’t know what to think. “It doesn’t sound like my kind of club,” he says, and yet somehow he finds himself at the worn and weathered door to the mysterious club.

Once inside Nicholas finds himself exposed to a world he could never have imagined. A world where each man is hotter than the last. Where every sexual desire, every fantasy, is fulfilled. There is nothing taboo and the word ‘no’ is not allowed. It truly seems like paradise.

But the club holds a deadly secret.

There are no free lunches. If ever there was an adage that was 100% true it is this one. Nicholas makes a shocking discovery and Mr. Edmund Phillips is at the very heart of it. Suddenly Paradise doesn’t seem quite so apt a name for the exclusive club. And when he is caught talking to the coat check boy about what he has found he wishes he had never met the charismatic Mr. Phillips. Never enjoyed the pleasures of Club Paradise. Never gone behind the waterfall.

Club Paradise is erotica and horror mixed into one twisted tale! It is a quick and fast paced story with extremely strong and descriptive sex scenes.

The undertones for the Garden of Eden are evident, but instead of the apple it is virile young men and greed. The story has a wicked plot twist near the end that was unexpected. It’s hard not to feel bad for Toby and Nick, but they took part in paradise and paid the price.

Club Paradise will keep you interested from beginning to end. However, please take the publisher’s “warning” seriously when deciding if this is the story for you.