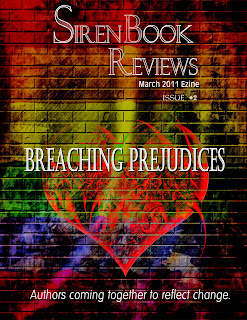 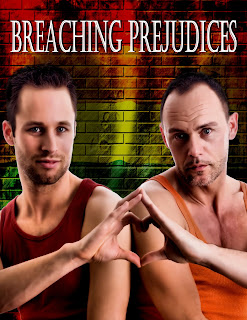 Breaching Prejudices is a free EZine that will be brought to you by many great authors, readers and friends. We’ve come together because we see an injustice, and because we want to see change. Within these pages will be passionate people who feel strongly about the mistreatment of people based on sexual orientation. By using the tool we have handiest, our words, we offer them our support.

The inspiration for Breaching Prejudices was a single person. This man was treated unfairly, singled out by an entire network of people, simply because he chose to share who he was through his own words and pictures. The treatment he received was intolerable and his friends would not allow him to stand alone in this issue. No one should have to hide who they are.

From there, the idea of Siren Book Review’s March magazine being dedicated to this grievance grew as more and more people got involved, proving that a great many of us will not stand for finding fault for those who are, who they are. We are here in hopes of getting the word out that this isn’t a matter to be shunned. Gays, Lesbians, Bi-Sexuals and Transgender are not people to look down upon. This is their lives, to do with what they will.

You will find within these pages, interviews, articles and short stories about the rights of acceptance. And that is what we all want isn’t it, no matter who we are?

For whom we were born to be, no matter of culture, heritage, or sexual preference.

To appear in SBR's March Issue, a story about a college student and his boyfriend, who will stand up for what is right. It will available soon on the SBR website: 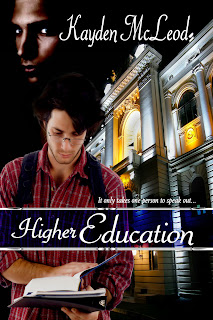 Ricky’s eyes flashed with danger—a stick of dynamite ready to blow at the slightest spark. “Hey bro, I thought you said this was a first-rate school, with good people who could teach you science?”

Seth placed his closed fist against his mouth, and then cleared his throat. “It is.”

“Shouldn’t they be refined and well, educated? Why do they act like their descended from cavemen?”

“Umm, Rick—the entire human race is descended from cavemen,” Seth reminded him with a grin. The relief on his face made Theo feel better, but his agitation wasn’t nearly settled. Ricky and Theo had shown in the nick of time for this instance. What happened tomorrow, and the day after that?

“Damn straight I am. And not too impressed with the welcome party, at all, if you can’t tell that already. I thought adults went to college. I thought people in this era had begun to progress and accept that everybody is different and had a right to be. What are you twelve, with your head up your butt?”

Seth snickered. He knelt to collect his books, obviously feeling safe enough to begin to do so. Ricky stepped forward to help him, glaring at the students. One or two took the silent hint and backed away.

“I don’t know what you’re talking about,” Mark said stubbornly. He’d gotten over his shock, feigning annoyance. The guy was still scared, and Theo could see behind the pride. Now he wanted to save face, redeem his “manhood,” to look tough in front of his friends.

“Of course you don’t. Your kind never does.” Theo sneered at Mark’s expression of indignation. Then, he turned to address all of them at the same time. “All of you are horrible human beings, and no better than Mark is.”

Theo turned toward her. “Your crime is just as bad. You stood here and watched, allowed it to happen. It doesn’t matter if you’re the aggressor or the observer! How would any of you feel if you weren’t accepted by everyone and shunned for a misunderstanding? Something you couldn’t help nor change—or even want to! What if you were pushed up against walls and beaten up? And while you are being degraded in front of an entire school like you don’t matter at all, every last person who has the power to help you, just stands there and watches? Like nothing is happening—no more than a television show or play. Well, let me tell you something, you’d go into depression. No matter what you did or said, there isn’t an end to it. Throughout your lifetime, someone is always there to knock you down the moment you finally get back up. A lot of people can be cruel, but kids—and to me, that’s all you are—who have no sympathy for their fellow man if he doesn’t fit your perfect idealism. Some of you have God complexes, thinking you have a right to judge us because we’re the square that won’t fit in the circular hole someone decided must be the right way, the only way. You tease and abuse other people without having any idea what you’re doing to them. You think you can get away with it, and a lot of the time you do. There isn’t a punishment for this, and if there is, it can’t fit the crime you’ve committed. There are gay teens thinking less of who they are because of incidents like this one. They hurt themselves or the worse, commit suicide. It’s people like Mark who make things like that happen.”

“Because what they’re doing is wrong, they have to be shown that” Mark insisted, but his voice was quieter now, not as confident.

“Is it? I don’t think so. When you kick a dog and keep doing it, eventually it won’t get back up. You’ve messed with his head, made him believe he is bad. Wrong. Eventually, whether human or animal, what others do will affect the victim. But he isn’t bad. He isn’t wrong. It’s just some jerk too high on themselves and their own opinions, unwilling to see past their own arrogance and admit it’s him who is wrong. That someone's life choices have nothing to do with anyone else. People have the right to be who they are. They have the right to not be scared, to not hide and wonder if the next corner they turn won’t push them or someone else over the edge.” Theo said his speech in a calm tone, though his fists clenched and unclenched, wanting to punch Mark. But violence wasn’t the answer. Fighting fire with fire would only get someone burned. So he would try something else. “Mark, how did you meet my boyfriend?”

“Did he say anything to you to make you mad, for you to hate him?”

“No. He never said anything to me.”

“So he did nothing to you.” Theo didn’t get an answer. Mark shook his head. “Then tell me, how’d you find out he was gay?”

Mark finally looked away, looking just a little guilty. “People that went to high school with him, go here too. They told us about him.” He nodded toward his friends, and not a one looked back at him. Mark didn’t want to be the sole focal point of Theo any longer, considering an even bigger crowd had gathered to watch the happenings. Theo’s loud voice had drawn attention.

“So you condemned him for nothing more, than what someone else told you?” Theo said dangerously. “You just decided he wasn’t a worthy person of knowing, because he likes men?”

“Yes.” Mark had run out of arguments.

“What did you think—that Seth might hit on you or something? What makes you think he even wants you?” Theo’s voice dripped with sarcasm. “Does every woman you know hit on you, just because you have a third leg?” Theo heard several women titter behind him, and it certainly wasn’t in Mark’s favor.

“No.” Mark stared at his feet.

Theo should feel some satisfaction at the fact he’d humiliated Mark. But he didn’t kid himself. Publically embarrassing the guy wasn't the answer. And not only that, it made Theo no better than Mark.

This did no good. To change people’s perspectives would take work, a lot of it. Each person saw the world differently, and to make them see there was nothing wrong with someone’s choices would take an individual circumstance to gain the successes.

Disgusted, Theo turned back to Ricky and Seth, who waited for him, books in hand. “Let’s go guys. We have better company to keep elsewhere.”

“Okay,” Seth said. Theo didn’t care for the downtrodden quality tucked away behind the nonchalance, on his boyfriend’s face. It wasn’t fair. It wasn’t right.

Why couldn’t people see, understand and respect everyone equally? Seth was just a guy, wanting to go to a college and reach his goals. Just like thousands of other students, no matter of sexual preference, or where they came from or what religion they celebrated.

Posted by Kayden McLeod at 7:38 PM