Ann Bruce, Dark Side of Dreaming 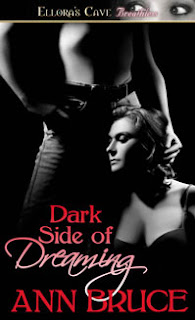 When she finds herself bound to a stranger’s bed, former cat burglar Cleo Moran knows she should’ve stayed in retirement. However, the thought of ending the cursed dreams that plague her sleeping hours was simply too enticing to resist. She also feels a strong sensual pull to her captor—but knows better than to act on it.

At first, Sasha Michaels wants only his captive’s professional expertise and contacts to track down the man who attacked his sister. Then Cleo wakes up and, with words and action, stirs something much more primitive within him. Neither understanding nor willing to accept her resistance, Sasha attempts to bind Cleo to him with sexual ties.

Their tentative relationship, however, is jeopardized by secrets on both sides…and a common enemy who is escalating in violence.

Cleo is shocked when the final heist she has planned so well ends up with her being held captive by one very dark and sexy Sasha. She is trying to calm her frequent nightmares and he seems to be the cure, but she isn't comfortable with it at. Sasha wants Cleo with a force he has never known but can they overcome the hidden desires and secrets that they both are hiding from each other.

Ann Bruce has written a great story with two people who have secrets to hide and still have this amazing attraction to one another that they can't seem to deny. She even has a few surprises in store for you. It is a great read that you will enjoy.