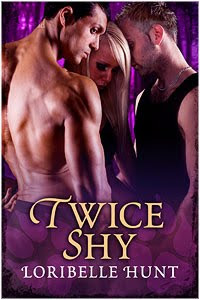 Harper is a witch on the run and the road ends in the only place offering sanctuary, the Redhawke werewolf pack. But that safety comes with a price. They’ll protect her from the men hunting her, but not from themselves.
Jonas is a soldier, a defender of the pack. He wants a mate who can stand toe to toe with him. Mick can. Harper can’t. That doesn’t change the need, the craving he has for her and when Mick brings the three of them together, he can’t resist their collective charms.

Harper has been through a lot, and she now calls the sanctuary home with the Redhawke pack, she know that Jonas doesn't like her and she is mad at herself for the way she and her body reacts when he is around which is all the time because he is assigned to protect her. She wishes Jonas was as easy going as his mate Mick, no such luck, but she does know Jonas will protect her no matter the cost, because it’s his job.

Jonas knows that Harper is both he and Mick’s mate, but he needs a woman who is strong and can handle him and his dark desires, even though Mick tries to convince him he is wrong, he knows what he needs. Now if he only gets his mind and his inner beast off of her, after all she is in danger.

Loribelle Hunt has written an amazing story, with the super alpha male Jonas in denial about how much his female mate can take and Mick who knows what they need to make them whole and of course Harper whom everyone is so quick to judge but who may just shock them all. If you are a fan of shifters this hot and sexy story will have you searching for you own wolf mate, maybe even two.