Shiloh Walker, Never As It Seems 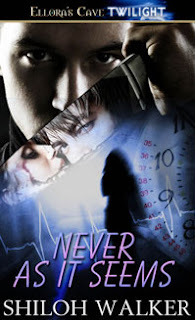 Three years after he walked away and broke her heart, Leo is back in Chloe’s life and that’s the last place she wants him. Not that she has any choice in the matter. She’s in big trouble. She needs somebody to watch her back, and he’s the “somebody”.

Three years ago, Chloe dumped a bombshell in Leo’s lap. I’m psychic, she told him. As if he was supposed to believe that. His world is black and white, and he doesn’t buy into that mumbo-jumbo. Walking away from her damn near killed him, but he couldn’t be with somebody he couldn’t trust.

Chloe is a psychic, she has known it forever, but when it comes to her ex he just thinks she is crazy. In his world things like that are just not real, and he thinks that if she lies about that then she is not even worth keeping around. But now Chloe needs his help and he is the only one that can keep her safe.

Leo thought that when he let Chloe go, that because of the games she was playing it would be easier than it has been; he was wrong. How come he can't get her out of his mind? He can still smell and feel her on his skin, it is driving him crazy and now he has to protect her, oh this should be fun.

Shiloh Walker has done a great job at opening our eyes to another part of the world that not all of us believe in, and she makes you believe. Not only does she make you feel the heartbreak and love between Leo and Chloe, she brings you into the danger that has become Chloe's life. While the twists and turns take you in a direction that you aren't expecting to go, Shiloh does an amazing job of keep you on the edge of your seat and you'll never expect where the journey ultimately leads.