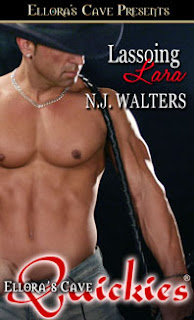 Brody Courage wakes up after a night out with his brothers and finds himself naked and tied to his bed with no idea how he’s gotten there. Just when he thinks he’s going to have to rip apart the headboard to get himself loose, he hears someone entering the house. He thinks it’s one of his brothers and calls out for help, but it’s Lara Jacobs, his childhood friend and neighbor.

He’s humiliated to have to ask her help and swears her to secrecy. She’s quiet and pale and leaves after releasing only one arm. When Brody finally gets himself out of bed, he finds a pair of red lace panties stuck near the footboard—a perfect match for the red bra he’d glimpsed Lara wearing when she bent over to untie him. It’s then his memories of the night before start to flood back. He spent one hell of a night in bed with his neighbor.

Now he wants another. One he can remember. But there’s the little problem of Lara avoiding him…

Lara didn't think she could ever be with Brody, as much as she wanted him. She just couldn't stand it if he turned her down and ruin their friendship. So when she saw the chance she took it.

Brody could not believe that he was tied up to his bed and didn't remember a thing, until Lara comes back looking for something she left behind. He knows he wants more, but she is doing everything in her power to ignore him.

But he isn't giving up.

This is a delightfully funny and sexy story, that was such a great read. As a NJ Walters fan, she doesn't let us down in this sexy romance. You will really want to read this one over and over again.