Wynter Daniels, Getting Even with Warren 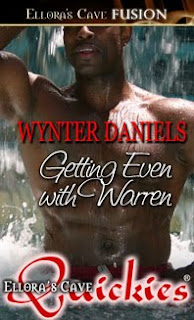 Title: Getting Even with Warren

Widow Macy Halstead learned of her much older husband’s voracious appetite for cheating shortly before his death. Now it’s too late to get back at him. When she meets his bi-racial illegitimate son at the funeral, a mutual attraction flares. She leaves with him and the two share a night of hot passion.

Alex Jackson set out to get back at the father who treated him like dirt. Bedding his old man’s widow fit the bill—until he forgets his reasons and realizes he really likes Macy. But after a steamy fling, she seems to have second thoughts. Can they overcome their initial agendas and explore the possibility of a relationship?

Macy cannot believe that her husband was such a cheater and that they would actually show up to his funeral, but when she gets a look at Alex she can't decide if she is happy she is there now or not, but she will be happy shortly if she can just get him to leave with her.

Alex wants to get even with his dad and what better way than to have an affair with his wife. But what he doesn't expect is the feelings that are so strong between them so fast.

This is a great story of two people who are out for revenge, but discover so much more than expected. Wynter Daniels has written a funny and so very sexy story that you will love.