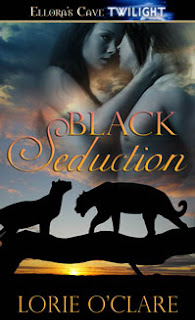 Raul VicMoran and Angela Kalucian will not tolerate what Colony is doing to their kind, the jaguars. One of the leaders in the community is making arrangements with the humans to sell their services as mercenaries. Hired killers. To hunt, capture and eliminate someone else’s prey. The level of humiliation is too strong to endure.

After fleeing Colony, Raul and his two male littermates travel through the mountains, south into the desert and finally the jungle as they work their way to Central America, where the only other known colony of jaguars live. Raul and Angela’s love for each other blossoms during their trials and ordeals while traveling. Angela also comes to respect all three VicMoran males to the point where she feels protective of them. Raul knows in his heart, without any doubt, Angela is his female. No one will ever challenge him for her. But for one night, in the complete blackness of the heart of the jungle, all three VicMoran males will share Angela, truly bonding the four of them together for life.

Reader Advisory: These cat-shifters aren’t your everyday cuddly tabbies. The males are wild and feral; the females are strong and won’t roll over to have their tummies rubbed. They make leopards seem domesticated. If you want your loving untamed and fierce, then come take a ride on the wild side…if you can stand the heat.

Raul is a jaguar and he knows his mate is Angela and has known for a long time. He has been willing to let her grow and enjoy her life, but with the problems going on in the Colony he can't wait any longer, it isn't safe nor is it where any respectable jaguar would remain with all that is going on. Now he must change his plans for seduction and claim her as his mate and protect his litter.

Angela doesn't like all the things that Raul makes her feel, and it really makes her mad when he is tries to claim her as his mate. She doesn't need any of it with her litter mates trying to cause an uproar within the Colony. Angela doesn't want to be another notch on his bedpost, and she for sure doesn't believe that he wants her as his mate, but she sure does not mind all the hard work he is putting into trying to convince her,

Lorie O'Clare has done an excellent job bringing us into the world of the Black Jaguar; they are so seductive and she shows us all the struggles they are facing and surrounds us in their world. Raul an honor bound Jag who will do whatever is needed to protect his mate and his litter mates, is so very sexy and exciting. Angela is a strong honorable female Jag, who wants to protect the Jaguars race and is torn between emotions she must face and the decisions she must make. I can't wait for Lorie to continue with the Black Jaguars stories, so we can see their hot and erotic world evolve.