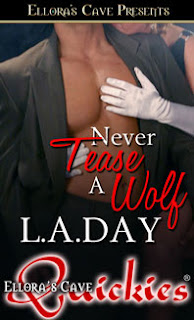 A harem outfit and a flogger? Sounds like a party. That’s why Jenny chose them as the key ingredients in her plan of seduction. For two years she has worked for Damianos Alexander, but tonight at the costume party she’s determined to become more than his secretary. Tonight, she’ll take that sexy male animal home—to her bed.

Damianos always gets what he wants, and he wants Jenny. She’s half naked, her body undulating in the movements of an ancient dance. Tempting every man in the room, including him. Too bad she doesn’t realize she’s tempting a wolf. Once she unleashes his feral side, there is no turning back.

Publisher’s Note: This story was previously published elsewhere under the title Dancing for the Wolf.

Jenny has realized that over the last few months, her attraction to her boss has become more and more difficult to ignore.

So she has a plan. And if it works she will be in his bed, by the end of the party.

Damon doesn't know what to do with his attraction to Jenny, but when she comes on to him at a business party, things have now changed. She doesn't really understand what she has gotten herself into, but it may just be too late.

L.A. Day has written this great quickie with the right amount of hot, steamy wolf loving, and humor to go along with it. She will have you laughing out loud at Jenny's funny comments, and wishing Damon was spending the night in your bed.

It is a definite must read.