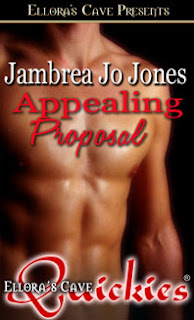 Blurb/Summary:
Attorney Becca Scott doesn’t have time for a relationship. She’s worked hard to prove herself to the old boys’ club and now it’s her time to shine. She certainly doesn’t have time for the tempting Samson Roust. He’s totally lickable, but sex with the boss is never a good idea—unless you draw up a contract to protect yourself. At least, it seems like a great idea to Becca.

Samson, however, knows his passion can’t be contained by a silly document. He lures Becca to his house for a meeting and the case of Scott vs. Roust gets some much-needed deep probing of the sexual kind.

Now Becca must decide if she should close the case on love…or engage Samson in more intense negotiations.

Becca is extremely attracted to Samson and there is no way she is going to let him know or give into the feelings that he makes her feel. After all he is the reason that she didn't get the position she wanted. If she decided to act on her desires she would never know if he was going to turn against her, unless she has a contract for sex only that way they can keep it purely on a physical level no emotions involved. Samson knows that Becca is running scared especially when she has this crazy notion that he is going to sign a contract to have sex with her, when he wants so much more.

Jambrea Jo Jones is an amazing author who is making you laugh one minute with the quick wit and rambling on of Becca and totally fanning yourself with the complete sex god she has created in Samson. She has made this story an extremely sexually hot story with humor to go along with it, I was laughing one minute and feeling the sexual tension through the words on the page the next. You don't want to miss out on this great story from a wonderful author. It will for sure go in your reread often pile.