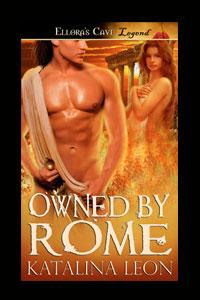 On the edge of the Roman Empire, Queen Boudica’s rebellion has ended and a time of great tragedy has passed.

Atellus, a Roman magistrate living on the western frontier of Gaul discovers he’s no longer sympathetic to Rome and must now question every facet of his life.

A cunning Celtic woman with golden-red hair arrives in the slave markets defiant and angry-a danger to anyone foolish enough to purchase her. As punishment for her willful destruction of Roman property she is to be offered as a sexual favor to guests at a lavish feast and put to death for their entertainment.

In the heart of the forest, two strong-willed lovers clash, fall in love and catch a glimpse of what the future can be if both can learn to trust and forgive.

Owned by Rome is a steamy story right from the start and manages to continue that pace through to the very end. I enjoyed every moment of the tale and read it though in one sitting. The story stayed with me in the back of my mind throughout the day. I am sure that this is a story to be reread and savoured again at a later date.

The cover is definitely appealing and the characters are to be loved. This is a tale of initiation to the delicacies of bondage and as such was wonderfully done. Atellus is a heartbreakingly sweet man, for a Roman soldier, and his slave Rutilla, is no man’s slave. The irony that he sets one slave, Janni, free, who is complacent in her role as a slave and yet refuses to free Rutilla, who so wishes to be free was not lost on me.

The excesses of the Roman celebrations were so well depicted that I was both appalled and disgusted. Rutilla’s story is one of pain and suffering and to see her work through it until she reaches a new understanding and finally happiness, is enough to bring the reader to tears. I would definitely recommend Katalina Leon’s Owned by Rome and will remember it for some time. Wonderfully done Ms. Leon, I enjoyed it immensely.

Rhonda Callum-King -you're a Queen! lol
You are the only person to even mention the paradox of Janni and Rutila. I'm so glad you enjoyed the story. Thank you for taking the ride.
XXOO Kat

Thank you - I greatly enjoyed the story - it truly resonated with me :)