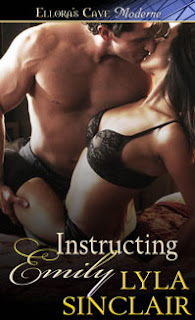 Graduate student Emily Brooks wishes she were going to a romantic rendezvous with Professor Mark Kendall. Instead, she’s heading to his office to salvage her grade-point average, since she was too distracted by his hotness to pass some of his tests. When the professor realizes Emily wants more than a passing grade, he agrees to retest her—while he administers some new, very pleasurable distractions.

When Emily passes, Mark invites her to his house for the weekend and she’s thrilled that her romantic dreams are finally coming true. However, once there, she learns he expects her to be his sex slave. His touch is too exquisite to resist and his demands and dominance become more and more exciting as the weekend progresses. But is this all part of a bigger test? And if she passes, will she get the one thing she’s wanted for years?
Note: Graduate at the head of the class by studying the rest of the kinky curriculum at E.J. Kumm University in Hard on Miss Hardin and Checking Out Audrey, also by Lyla Sinclair.

Emily is so mad at herself after all this time she could be going to her professor’s office for other reasons than her GPA. But nope not her and know she has to figure out how she is going to get out of this. Emily is completely in shock when Mark invites her to his house for the weekend, but when she gets there is even more shocked to find out that he wants her to be his sex slave.

Mark wants Emily, but will she be able to follow directions better than she did in the classroom, and is he willing to invest the time to teach her the proper way?

This book is on my TBR list. Your review made me move it up to next to be read!!

Thanks so much for the nice review, Yvette! I'm going to go post a link on my website.