Stevie Woods, Anthology—Binary Stars 5: The Heliotrope - The Partners and The Guardian 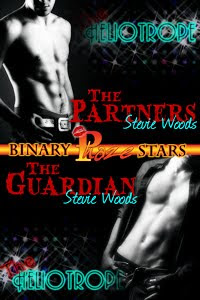 Title: Anthology—Binary Stars 5: The Heliotrope - The Partners and The Guardian

The Heliotrope is a club run by two vampires, in a world that knows about their existence. The Partners: Rick, a young human, visits the Heliotrope because he is curious about the accepted arrangement between vampires and humans where vampires receive blood in exchange for providing humans with sex. The Guardian: David is a Guardian, a vampire who has taken on the duty of protecting the humans from the rogue vampires who hunt for blood rather than obtaining it in amicable exchange. David is on his way to the Heliotrope when he discovers a young human, Rick, being attacked and saves him. David is drawn to the young man.

Binary Stars 5: The Heliotrope - The Partners (Book One)

There is a huge difference between making love—and sex

Richard seeks out the Heliotrope, a vampire-owned bar that he’d heard about through friends. It is owned by Bohdri and Antoninus, who have succeeded in making it one of the most popular of its kind.

It isn’t long before Antoninus claims Richard for himself, with intentions of giving the human the night of a lifetime. Unbeknownst to Richard, Bohdri has his eyes set on them too—inviting himself into the mix—but not to participate, only to watch.

Except deep down, Bohdri is in love with his maker, Antoninus, and has been for many-a-year. As the tale continues, the back-story comes into play; there had been a time when Bohdri was human and fallen in love with a vampire, who couldn’t bear to reciprocate the sentiment. Not when Antoninus’ life could stretch on and on by comparison.

But there is a way to fix that; isn’t there? But would the vampire even want to? In a slight of hand, Antoninus turns his human, and Bohdri lost the man he loved in the same moment.

The emotion shown between Antoninus and Bohdri makes you wonder what will happen between them—making you feel for their situation and miscommunication. Then enters Richard; the benighted human, who is only looking to satisfy both curiosity and lust. He gets caught up in the “cross-fire” he only begins to suspect.

I adored these believable and multifaceted characters, who plough through the story to their goals in impassioned scenes that will get your blood pumping, and begging for more…gladly, there is, in the second installment within this anthology…

Sometimes, decisions must be made, no matter the cost

David is a Guardian, an entity who stands between the rogue vampires and the safety of humankind. He knows his duties, but that doesn’t mean he doesn’t indulge in the knowing humans who seek out the Heliotrope and beyond.

Including Rick—Richard—one in the same who had appeared in book one of this series, and introduced to the pleasures a vampire can offer, by the owner of the well-known establishment, Antoninus.

The only problem; as the off-duty Guardian closes in on the Heliotrope, he hears an attack that can only be instigated by one of his own, and charges in to find a vampire taking his fill of an unwilling victim.

That victim? Is Rick.

In a split-second, risky decision, David saves Richard’s life—but what will the cost be to both of them?

Binary Stars 5: The Heliotrope - The Guardian (Book Two), much like the first installment, pulled me in from the get go. David and Richard’s meeting was a moment of desperation, but quickly sparked into more than just danger—an instant attraction neither could nor wanted to ignore.

Hot love scenes were coupled with fluid prose and editing, making this a great overall read. I loved this Anthology, with both installments from Stevie Wood, and will be looking for more in The Heliotrope series.