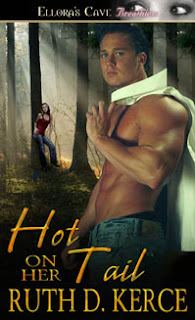 Captain Aaron “Ace” Trainer is assigned to protect a witness who will be testifying against a drug trafficking ring. The problem? It’s a woman he’s known since high school. A woman he’s never been able to forget. A woman he had a one-night stand with years earlier.

Rachel finds herself in big trouble. She’s gotten involved with an organization that wants her dead. She’s shocked to learn that Ace will be her bodyguard—the same man who treated her so badly after their night of hot sex many years ago. Now her life is in his hands. He’s still hot as hell and as sexy as ever, but he’s also just as arrogant and irritating.

Stuck in the forest, running for their lives, Ace and Rachel put aside the past and rekindle the fire that never went out. This time it’s more than hot sex—their passion turns emotional. Only their newfound love and trust in each other will be enough to save them. Rachel’s just not sure it will last this time, either.

Rachel’s life is on the line and she needs help, and the one person she has tried so hard to get out of her mind is the one that is hired to protect her. She has never forgiven him for the way he has treated her, and so this is not only a fight for her life but for her heart and she doesn't know which one is worse.

Ace can't believe that the only woman to ever get under his skin is the woman that he must now keep alive. He is scared that this time he won’t walk away with his heart intact. They have to put aside their harsh personal feelings and learn to trust and maybe even love one another, which is maybe the only way they are going to make it out of this alive.

Ruth Kerce has written a very intriguing suspense story that will keep you guys hanging on till the end with the twists and turns. This story keeps you on the edge and so excited to turn to the next page to find out what happens next, combine that with the hot toe curling sex and all the emotions that come into play with these two, you won't be able to put the book down until you have finished the entire thing and you have satisfied your curiosity for what happens at the end.